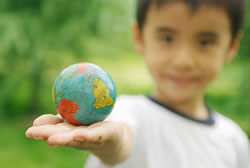 When your child starts to learn a foreign language before they’re 10 years of age there is still a good chance that they can get up to native level. This is because before that age, children can still reform the sounds they hear, understand and can form without an accent. That’s essential to learning a language in a way that there is no accent.

Not only that, but people who speak several languages have a huge wash list of other advantages. These include, being smarter, better capable of multitasking, staving off the effects of Alzheimer’s and dementia later in life, better memory and a greater capacity in your mother tongue.

For that reason, it’s a good idea to start your child early on learning an additional language. So that’s they ‘why’ now let’s get into the ‘how’ shall we?

Children have an amazing ability to pick up additional languages through repetition. There are many ways that you can do this. You can do an activity in their native tongue first then repeat the activity a day later in the language you want them to learn. Go back and forth a few more times and they’ll start to associate the words in the two languages.

Start off with easy words that are not vague – like physical objects, numbers and such. Abstract words will come later, once they’ve got a good grounding in the basic words and in the basic grammar.

Expose them to the sounds of the language

Every language uses different sounds (or phenomes) that we need to get used to. Fortunately, even subconscious exposure is enough for most children to pick up on them. So find the right radio channel online and let your child listen to it.

Even better, find their favorite show and let them watch it in the language you want to teach them. You can even let them watch the same episode in two languages – first in your own tongue and then in the tongue that you’re trying to teach them. Rinse and repeat (until they get bored with it anyway).

Use a lot of big gestures and non-verbal communication

A great deal of communication can be achieved through non-verbal communication. This is particularly true with children. So use that. Make big gestures that the child can understand. You can even make them funny, so that you know the child is more likely to pay attention to what you’re doing and strong emotions help fix things in long term memory.

Then say the associated word with the action. Get them to repeat the gesture and the word and you’re already a long way to fixing it in their vocabulary. Then just rinse and repeat (yes, you’ve gotten that idea, but still – consider this an example of how to fix something in memory).

Make them ask and engage with the language

Whenever your kid says something in their native language that they should be able to say in their new language, ask them to say it in that language. Now, it is very important that when you do this

you do it in a positive manner. Children – just like adults – often don’t like making mistakes and will therefore shy away from a language that they haven’t yet mastered and that is no way to get them working for a place like Writingjudge.com.

For that reason, if they do manage to say it correctly, then give them a great deal of encouragement so that they’re proud of themselves for getting it right. If they don’t get it right, show them sympathy and wish them better luck next time. If they understand that making mistakes in the new language they’re learning isn’t a punishable offence (And that you’re just happy that they’re trying) then they are far more likely to actually try.

We can learn quite quickly from parental role models, but we’ll learn even faster if we have play friends who speak the language that we’re trying to learn. So use all the above strategies, but also embrace the strategy of letting them learn by doing.

In this way, they will pick up the language as they go. This often works better than direct language teaching. Even better, because they’ll have friends who they want to communicate with, they’ll be much more motivated to learn the language. Often having a friend that speaks the language can significantly shorten the time span children need.

When you’re a child, learning another language can be fun, engaging and highly rewarding. It has a huge number of advantages and will be something that will benefit your child hugely later in life. For that reason, start them on another language.

Also, remember that they don’t just have to learn one language. There are children that can speak up to three or four. The trick here is to get them used to speaking a language close to their own, as this will be much easier to learn.

Then, once they’ve got the basic idea of language learning down, it is possible to introduce other languages that are substantially different. In this way, they will be able to use the first additional strategy to bootstrap their learning of additional languages.

Ashley Kornee is a blogger and freelance writer. She always tries to write about ordinary things in a creative way. You can find her on Facebook and Twitter.