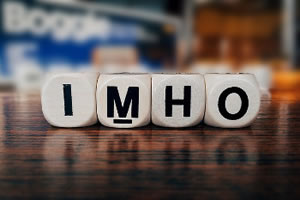 Just before you dismiss this post as some sort of linguistic gobbledygook (What on earth is an acronym?), a couple of examples from the real world to make it clear what an acronym is.

Your office. A client is waiting for you to get back with some information they requested, your manager breathing down your neck as it's urgent and the client is important. You open a spreadsheet which supposedly has this valuable data and boom! it says TBC. So, you understand that your next hour(s) will be spent on trying to get the actual information you need as this ‘TBC' is an acronym for ‘to be confirmed.' So basically (damn it!) you have no data you need.

Another example. A friend of yours changes his Facebook status to ‘YOLO' and disappears for a week. As it turns out he has blown all his money on a trip to Vegas. He comes back and realises that ‘You Only Live Once' is a pretty weak argument when it comes to paying your bills.

But acronyms have not been invented in our fast moving Internet era in a constant effort to get a message across in a shorter form and, consequently, in a faster way. Acronyms are actually pretty old. Here is a couple of quick flashbacks for you to get an idea of how old they are:

Today it's all three reasons why acronyms are so popular: economy of space (text messages, street signs, etc.), economy of effort (can't be asked to write the expanded version or to even pronounce it) and economy of time (too busy to spell it out). And really, the number of times American tourists repeat ‘Oh, my God!' they are better off abbreviating to OMG's to have more time for letting everybody around know what this OMG was inflicted by, for telling their loud story before the crowd attracted by the loud OMGing disperses. Just kidding, I love American tourists, they spread joy not only decibels.

On a more serious note, business and industry do need acronyms for convenience and succinctness ‘...as new inventions and concepts with multiword names create a demand for shorter, more manageable names.' [Source]

Even on a level of separate corporations various acronyms help cut the valuable time spent on communication. For example, Microsoft has their corporate acronyms, or abbreviations as they call them, conveniently recorded in MAD which is in itself an acronym for ‘Microsoft Abbreviation Dictionary'. 84 pages, no joke. Mad, isn't it?

Commonly known English acronyms, on the other hand, can be a real PITA if you are a learner of English (see explanation for PITA and other mentioned acronyms at the end of the post). They are widely used but most of them are not reflected in textbooks or even dictionaries. Surely your English speaking friends can tell you what they mean but then you cannot really keep bugging them with questions about each single word you don't know, didn't catch, thought you knew but seems it means something else entirely, was pretty sure was not offensive but your friend's facial expression has just convinced you to check the dictionary. Oh, and don't forget that these linguistic difficulties are added to the cultural ones: ‘Hm, why are we meeting for tea and ordering food? I have just had dinner and was about to enjoy a cuppa with you guys. I am actually not hungry. Sorry, looks like I just don't speak British... Tea indeed!'

Luckily, you don't actually need a dictionary or friends spelling it out for you. With the Internet you have your acronyms related questions covered. The problem is if you try to prepare for the acronyms that your English texting/emailing life throws at you and actually learn these acronyms, the Internet can be overwhelming. There is loads of info. Loads of unstructured info and loads of not relevant info too. Do you really care what acronyms were used by American soldiers during WWII? Or what acronyms are used in chat rooms by youngsters playing Minecraft?

Well, it's good to know perhaps but then there are many things which are good to know. And even better to forget. This knowledge won't help you decipher your friend's text: 'OMGFML! PMSL! BTW I'm OMW.' Or an IM from your colleague: ‘TBH the report you asked about yesterday is still TBD. Sorry for the delay, will be ready by EOB tomorrow.' Or your boss' email he has just sent you asking you to do something ASAP and adding: ‘FYI I'm OOF tomorrow.' OMG! WTH?!

You can obviously say, just look up the words as and when you come across them. After all, it's life and you cannot be prepared for every instance. You might come across a WWII acronym you will need to understand at some point too. And with your smartphone, voila - omnia mea mecum porto (All that's mine I carry with me), i.e. just google it on the go.

The problem is when you get the gist, you cannot be bothered to take care of linguistic details. And that is when you see a word ASAP for example. Better leave your linguistic curiosity unsatisfied if you have real work to be done ASAP. But letting unknown vocabulary stay unknown is a pitfall too as there may come a moment when this unknown vocabulary will bite you in your rear, it will prevent you from understanding an important message or will lead you to misunderstanding it.

So, what's the solution? I suggest you drop unknown acronyms you come across into spaced repetition software, such as vocBlocks, and learn these acronyms to expand your vocabulary. Or even easier, just learn a ready vocBlock ‘Popular Acronyms Used in Private and Business Messages.' It contains common English acronyms used in private texting and social media interactions as well as in business communication.

A good thing about the ‘Popular Acronyms' vocBlock is that it has transcription for each acronym. ‘Who needs transcription for acronyms?' you might ask. And would be right. Almost. Yes, of course loads of them are pronounced as individual letters, for example, BFF /'biː ef 'ef/, OMG /'əʋ em 'ʤiː/, TMI /'tiː em 'aı/. But it's not all that straightforward, I am afraid. Some of them, as it turns out, are pronounced as words, for example, FUBAR /ˈfuːbɑː/, YOLO /'jəʋləʋ/ and some as combinations of individual letters and words, for example, the US variant of the acronym ASAP /eı'sæp/.

Then there are such monstrosities as B2B /'biː tə 'biː/, B4 /bı'fɔː/ and Gr8 /greıt/, where numbers are used for the purpose of pronunciation. And if those cyclops were not enough, there are also the so called ‘pseudo-acronyms'. These beasts are made up of letters that invoke other, longer words with less typing, for example, CU /siː juː/ stands for ‘see you', IOU /aı əʋ ju:/ for 'I owe you'.

Just like normal words, acronyms can be stylistically coloured. Now, to avoid stones being thrown into my linguistic head, let me clarify. When you look up a word in the dictionary, you need to check if this word is stylistically coloured, i.e. marked in the dictionary as formal, informal, colloquial, literary, rude, etc. Most words won't be marked by any of these words, i. e. they are stylistically neutral. But with those that are marked, you need to be careful and treat them based on this stylistic info, for example, avoid using informal words in formal reports.

Thus, another not surprising (see above) surprise with acronyms is that some of them are NSFW, in other words, they are rude as have f-words so are better avoided in corporate settings and in educated circles alike. So, leave those FFS's, FML's and WTF's for an occasional rant with your friends and relatives (not kids!)

Most acronyms used in texting and social media such as LMAO, LOL, PMSL, ROFL are informal, so unless the atmosphere in your office is intentionally relaxed or unless your manager is also your best buddy, you'd better leave them for your Facebook communications. Saying that, office environment is not sterile, so CYA's and FFS's can be occasionally thrown in too though I wouldn't risk it if you are not sure.

Guys, HTH. If you find these tidbits useful, share them with your friends, TIA.

Julia is a linguist, a PhD level education expert and a co-founder of the website vocBlocks: a study tool helping busy people learn foreign languages by organising and learning new vocabulary in bite sized blocks on the go.