The Geography of Thought ... and Language 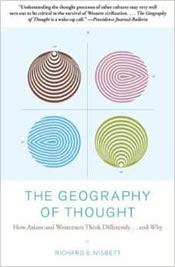 The Geography of Thought is worth reading simply because Richard Nisbett describes such vast differences between East Asian and Western mentalities, and the persistence of these differences over thousands of years from a strictly environmentalist point of view. The book is both fascinating and frustrating at the same time.

The book starts in ancient Greece and China, discussing how the predominant philosophies, the individualism (personal agency) of the West in contrast to the collectivism (collective agency) of the East have made thinking very different. The Greeks understood things as linear and simple, devoid of context, whereas the Chinese regarded the world as a complex place in constant flux, with objects best understood by their relationship with each other, rather than as separate entities.

Nisbett then traces the origin of these different modes of thought to the socioeconomic and cultural factors that gave rise to these two very different civilizations, an archipelago focusing on maritime trade versus an agricultural empire). Nisbett moves into the present day, looking at how East Asians and westerners perceive the self in contrast to the collective, using numerous studies to support the claim that East Asians are more interdependent than westerners, who tend to be more individualistic.

One particularly interesting point contrasts American and Chinese children's books. The famous lines "See Dick run ..." are much different than those in the equivalent Chinese primer, which doesn't describe actions by an individual but, instead, describes information about relationships between people: "Big brother takes care of little brother ..." Later in the book, the Nisbet describes the way children in Asia, Europe and America are raised by their parents, but also the ways that they think of relationships between things. For example, when given a series of images to pair together, an Asian child is more likely to group a cow with grass because cows eat grass. An American child would be more likely to pair the cow with a chicken because they fit into the same "taxonomic" category.

As a life-long student of Chinese, as well as other languages, I've always believed that languages are simply human creations, tools that we invent and hone to suit our needs. But Nisbet shows us that speakers of different languages actually think differently, but he doesn't tell us whether it's the culture that's shaped the language, or the other way around. To demonstrate the causal role of language, what's needed are studies that directly manipulate language and look for effects in cognition. One of the key advances in recent years has been the demonstration of precisely this causal link. It turns out that if you change how people talk, that changes how they think.

A difference in language practice that's noted often by Chinese speakers and English speakers when they hear how the group handles it concerns the proper way to ask someone whether they would like more tea to drink. In Chinese one asks "Drink more?" In English, one asks "More tea?" To Chinese speakers, it's perfectly obvious that it's tea that one is talking about drinking more of, so to mention tea would be redundant. To English speakers, it's obvious that one is talking about drinking tea, as opposed to any other activity that might be carried out with it, so it would be odd to refer to drinking.

Train yourself to write regularly, repeated writing improves your skills. Each time you write, you improve on expression and information content. You learn from your mistakes and improve on them. Here are some good topics for a cause and effect essay.