by Karen Foo of JapaneseUp

You might think that Japan is an isolated country with little language influence from other countries.

But do you know there’re many Japanese words originating from or based on foreign languages?

Many of these words are derived from European languages such as Portuguese, Dutch, French, German and (mainly from) English.

Due to the many Western ideas imported into Japan in modern times, there’re thousands of these word borrowings. These loan words are commonly “nipponized.”

Many loan words are pseudo-borrowings i.e. despite their links to foreign languages, these words in Japanese aren’t used the same way as in their origin languages.

In fact, many such terms, despite their similarity to the original foreign words, aren’t easily understood by speakers of those languages.

Below are 7 such pseudo-borrowings. They’re commonly used loan words from other languages which are often mistaken for English words in Japan.

This word is derived from the German word “arbeit” (work) but it doesn’t mean the same thing in Japanese. Instead, it’s used to refer to a part-time job.

So if your Japanese classmate says he’s going to arubaito, it means he has a side job. 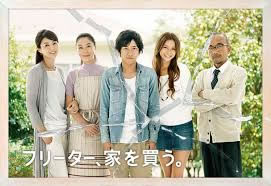 This word is derived from the English word “free” and the German word “arbeiter” (labourer).

It refers to underemployed young adults who opt to work (a series of) part-time jobs rather than engage in permanent employment. Note: this doesn’t include housewives and students.

There’s even a Japanese drama called フリーター, based on the story of such a young adult.

Just take the first three syllables of “convenience store,” pronounce it like a Japanese, and voila, you get konbini!

If your Japanese friend says he stays in a manshon, don’t jump to the conclusion that he’s rich!

Although it’s derived from the word “mansion” in English, it doesn’t refer to a large and imposing house that native English speakers think of.

In Japan, the word refers to a modern concrete apartment or condominium block.

If your Japanese colleague tells you he’s going to check on his penshon, does he mean he’s checking how much he’ll get from his company or the government when he no longer works?

Nope. The word is derived from the French (not English) word “pension” and it means a resort hotel, chalet or cottage.

Which means he’s doing research for his holidays, not checking for his retirement.

Boy, did I get confused with this one when I first heard it! This word is derived from the English word “service” and but confusingly, it doesn’t mean service.

Instead, in Japan, it’s often used to describe something as being free of charge. So if someone says this to you, it means whatever he/she is offering you is gratis.

This word is derived from the English words “one piece.” Can you guess what it means? Hint: If you’re a woman shopping for clothes, you might end up buying one of these.

Answer: wanpīsu refers to a dress. Since it’s a single piece of clothing, the Japanese borrow the English words “one piece” to refer to a dress.

You’ve just learnt 7 Japanese words gleaned from other languages. Many loan words mean one thing in the original language, and something completely different in Japanese.

So be careful with your assumptions when you come across Japanese words that look similar to words in other languages!

By the way, you’ll notice that all the 7 words today are in katakana. If you want to brush up on your katakana, try playing a katakana writing game. Good luck!

Karen’s love affair with the Japanese language started from the song “Say Yes” by Chage & Aska. She currently runs a Japanese learning website to marry her love of Japanese and flash games. You can learn and listen to other useful Japanese phrases at her website, JapaneseUp.