That Squiggly Dash above an 'n'

(and its linguistic significance) 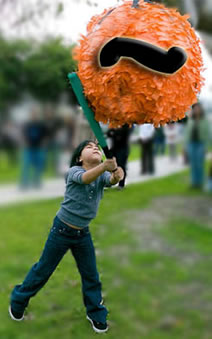 I have met a number of fellow Filipinos here in Canada who have changed their names by removing that squiggly dash over a letter 'n' in their surnames, because they felt that having a surname with a "weird" mark like that was a nuisance or even embarrassing. They said that they also got tired of having to explain to legitimate English speakers how to pronounce their surnames correctly. So, to solve the problem, they simply got rid of that "thingy."

I'm talking about surnames like Roño, Peñafrancia, Sobreviñas, Arañas, and Dela Peña-surnames that have a tilded 'n', or an n that has over it a diacritical mark called tilde (~). Now, what the heck is embarrassing about having a surname like those? Just because words with diacritical marks like the tilde are not originally English, that you would already feel embarrassed about having them in your surname. Pardon me, but I think removing the tilde (or any other diacritical mark for that matter) off a surname is not simply altering the linguistically correct pronunciation of the name; more than that, it's tantamount to disrespecting one's name and ancestry. Worse, it may also be seen as a display of ignorance about the significance of diacritical marks.

It's there for an important reason

The tilde (~) is a fundamental unit in written language that has several uses. One of these is being a diacritic (or diacritical mark) placed over a letter to indicate a change in pronunciation, such as nasalization. The tilded 'n' ('ñ', 'Ñ'), in particular, developed from the digraph 'nn' in Spanish. In this language, ñ is considered a separate letter called eñe, rather than a letter-diacritic combination. Borrowed from Spanish, the ñ (eñe) of the current 28-letter modern Filipino alphabet has the same function-it stands alone as a separate letter, representing a palatal-nasal type of consonant, used for some loanwords adopted from Spanish. In the International Phonetic Alphabet, the symbol that represents the sound of the eñe is ?. For English speakers, the best reference to how they should pronounce the ñ in some Filipino surnames and in some English loanwords are the words canyon, lasagna, onion, and union. Furthermore, even though the English language does not consider ñ a separate unit in its 26-letter alphabet, it still recognizes as entries in its dictionary a number of loanwords that contain the so-called tilded 'n', such as El Niño ("a global coupled ocean-atmosphere phenomenon"), jalapeño ("a variety of chili pepper"), mañana habit ("procrastination"), piña colada ("a sweet, rum-based cocktail made with hard rum, coconut cream, and pineapple juice"), piñata ("a brightly-colored papier-mâché, cardboard, or clay container filled with any combination of candy, small fruit, food items, and toys"), señor ("Sir or Mr."), señora ("Mrs."), and señorita ("miss or Ms.").

Now, who said ñ, or eñe, also known as the tilded 'n', is not recognized by or does not exist in the English language? It's time to review or update your English.

So, before you remove that squiggly dash off your precious surname (in case you have it)-a name which your ancestry has preserved all this time-just because you thought that the tilde has no place in English, better think twice! You're not only disrespecting your heritage; you're also betraying your ignorance about the English language. If there's one person who should be proud of your name, it's no one else but you! And if there's someone who should feel embarrassed, it's those people whose first language is English who don't know how to pronounce your surname properly. Why? Because they do not know that English-their very own language-has long adopted as dictionary entries foreign words that have letters with diacritics like the tilde (~), acute accent (´) and grave accent (`), cedilla (¸), circumflex (ˆ), and umlaut (¨)-loanwords that include animé, exposé, résumé, café, cliché, discothèque, doppelgänger, façade, karaōke, mêlée, naïve, papier-mâché, smörgåsbord, and über.