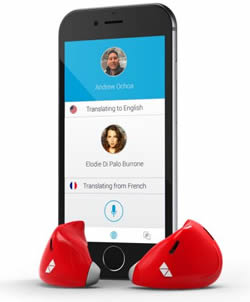 For the veteran globetrotter, learning languages on the fly isn't always feasible. Now, a new technology on the horizon offers on-the-go translation through an earpiece called the Pilot. The Pilot, engineered by Waverly Labs, promises to use a pair of corresponding earpieces to translate in real time between a few starting languages: English, Spanish, French, Italian and Portuguese.

Although the first generation of the product can only translate between two people who both have the Pilot earpiece, users can also speak into a reciprocal mobile app, which then translates into the earpiece. Although this technology is still in the development phase, Waverly Labs expects the first finished product to be delivered in May of 2017.

The tech start-up set up a crowdfunding campaign on Indiegogo, and within just one day of posting their campaign, the Pilot earpiece already raised over $1 Million USD. The Pilot quickly captivated the internet, and it was even compared to the science-fictional babel fish, straight out of The Hitchhiker's Guide to the Galaxy.

While Waverly Labs' Pilot earpiece is still in the works, the technology to cross language barriers is always evolving, and the possibilities of a mobile translation device are closer than ever before.

Many people who are interested in the Pilot technology envision young explorers using the device while traveling abroad. The Verge wrote on the new device: “[Pilot] may or may not help you woo foreign cuties”. However, there are plenty more possibilities for how the Pilot earpiece could be utilized beyond a leisurely capacity.

With the addition of more diverse languages, the Pilot could be utilized throughout the world to help small businesses go global, aid humanitarian work across all borders, and even reconnect generations of families through language translations.

Technologies like Skype Translator already offer machine-learned interpretation via Skype's video and voice calls, and by taking instant translation to a mobile device like the Pilot, we can see language barriers coming down more and more each year.