The script is written from right to left in horizontal lines running from top to bottom.

Each block represents a syllable. The nucleus of a syllable is placed at the centre of the block. Onset is to the left of the nucleus and coda is on the right. Tone marker is either written above or below the nucleus according to pitch level of the tones.

There are no syllabic delimiters. Even syllables are written a bit lower than the odd syllables to serve this purpose.

Similar to the vowels, but this time remove the adjacent lines of the two vowels in a diphthong. Whenever appropriate, dots can be used to indicate the first component of diphthongs, in order to avoid confusion. For example, without marking the first component with a dot, the letters for /iu/ and /ui/ would be identical.

Desmond started by breaking down phonemes into components such as bilabial, plosive, alveolar, etc. Then he assigned a symbolic letter to each component, reflecting some features of the component, for example, two horizontal lines for bilabial and a U-shaped letter for nasal. The two most significant components of each consonant are stacking to form the letter. The stacking order is not regularised so as to increase the degree of freedom in aesthetics. Two or more consonant letters can be combined to form new letters for consonant clusters.

Markers for level tones are horizontal lines, while markers for rising and falling tones are L-shaped lines. 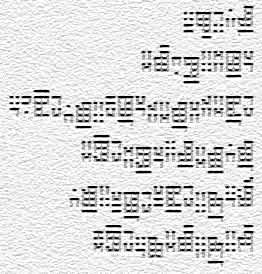