Galay is a universal constructed alphanumeric and logographic script devised by BethSheba and Steven Ashe. It is based on the arrangement of letters corresponding to the Seven Palaces of ancient Judaism according to a cryptogram in the Book of Concealed Mystery (a Zohar text).

The universal script is called 'Galay' but in order to avoid confusion BethSheba has simply called the writing - Visual English, Visual Hebrew, Visual French, Visual German and so on. You can represent any language that can currently be represented with either the Latin alphabet or the Hebrew alephbet, or that can be transliterated to either (Arabic, etc).

Visual English is a visual ‘logographic’ English Script. It’s easy to learn because it’s based on a simple visual and mathematical reference to the letters of the alphabet.

Visual English text has an average of 5 times less characters than the written alphabet so communication with Visual English is much faster, and what’s more – regular users may improve their IQ as well as developing and exercising their short and long term memory by simply reading a book or texting a friend with Visual English.

In Visual English, words are written with a single character – a ‘wheel’, and the letters of the alphabet correspond to the elements of the visible word. Each letter also has a numerical value so when you add the numbers of the letters together, then every word has a corresponding number associated with it.

How to read Visual English

Words are written from left to right and from top to bottom unless otherwise indicated by the text itself.

The order of the letters in any Visual English word is recognized by their color in the spectrum.

The first letter of a Visual English word is red; the second – orange - yellow - green - cyan - ultramarine - violet and magenta - through the spectrum. The ninth letter returns to red but appears with a different texture (for example with hearts, cats or even a picture of your favourite pop star or actor).

When there are multiple examples of the same letter in a word – they are indicated by dots adjacent to the letter.

There are a several natural advantages that come with the acquisition of a visual language besides speed of communication. Visual English is more easily remembered because the language is visually structured. Visual English may improve IQ as test results in countries in the world that currently use logograms are statistically above the norm. Good graphicacy is just as essential as good literary in the modern world and the wheel can be made into a simple and colourful child’s toy so that the basics of Visual English can be easily acquired - even by young children.

Visual English is usually coloured but like all Galay scripts it has a Shadow script version which features no colours. The shadow script consists entirely of black characters. It has its limitations in comparison to Visual English in that it cannot represent the order of the letters indicated - so each word is an anagram for deductive readers.

The more you read and deduce Visual English - the better you will become at visually memorizing Visual English words until your brain one day shifts gear into true logographic reading and you master the shadow script.

As readers become more experienced and well-read they may only need to use deduction based reading when they encounter new words or unfamiliar names for the first time. 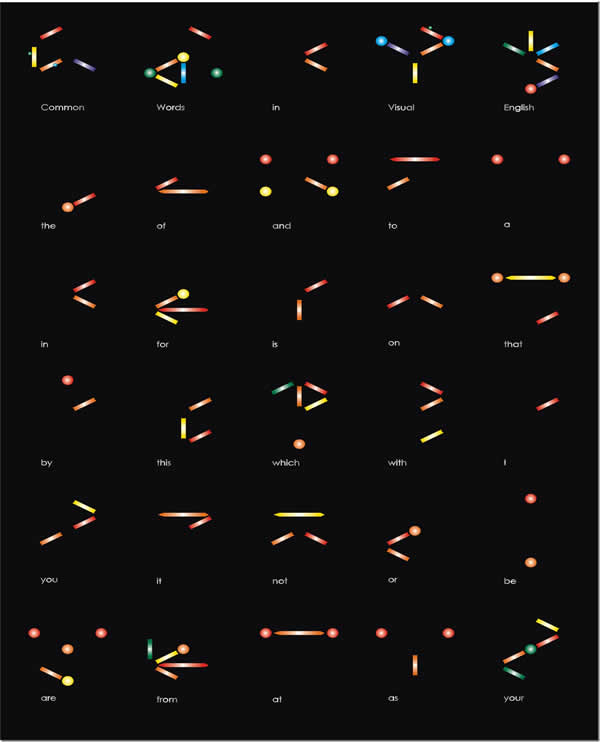 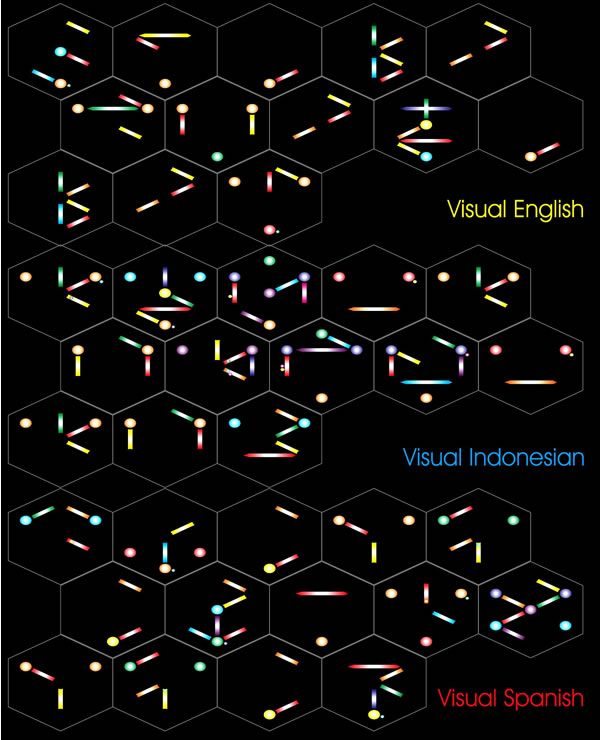 More of the ancient origins of the script can be discovered at
https://www.facebook.com/pages/The-Zohar-Code/394711244031628