Wakandan is an alphabet designed by Hannah Beachler, and used in the 2018 film Black Panther. It is based on Nsibidi symbols. In the film it is used to transliterate English text in the credits and other on-screen text. Another script used in the film was developed by Oluwaseun Osewa and inspired by Nsibidi, a system of symbols used in southeastern Nigeria between about 400 and 1400 AD.

Sample text in the Wakandan (in English)

Sample text in the Wakandan (in Xhosa)

This script is only used to transliterate English in the film, as far as I can tell. However, Xhosa is spoken quite a lot, so I thought I would include a sample text in Xhosa as well.

The Wakandan font used on this page is Wakanda Forever, created by Adam Shady.

Sample of the Nsibidi-inspired script 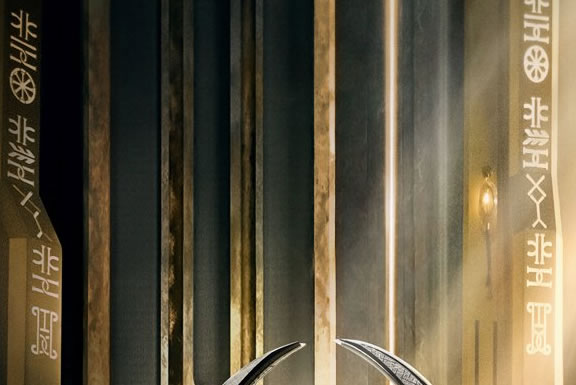 According to Raven, this means "meeting-or-Congress hall for the Panther King and Nation".

Information about how this script was created
http://www.indiewire.com/2018/02/black-panther-wakanda-written-language-ryan-coogler-afrofuturism-1201931252/