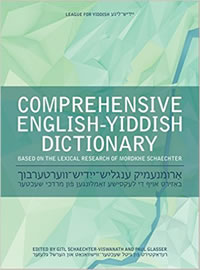 For nearly half a century, Yiddish-speaking English students have used the "Modern English-Yiddish/Yiddish-English Dictionary'' as their reference. With no recent updates, students in need of help have had to contract translation services to complete their assignments.

Now, for the first time, a new Yiddish-English resource guide is available, edited by Gitl Schaechter-Viswanath and Paul Glasser. It's a fitting publication, as the resource guide now includes thousands of new words, including those used by millennials, such as "texting," "transgender" and "email."

The Comprehensive English-Yiddish Dictionary from the University of Indiana Press, contains close to 50,000 entries and 33,000 sub-entries. It underscores Yiddish as a living language, which is still spoken by 1.5 million speakers around the world. The collection and research for the literary and spoken Yiddish language was led by the late Mordkhe Schaechter. The collection includes the language in all its varieties, leading to the publication of a present-day dictionary that reflects Schaechter's vision of today's and the future's usage of the Yiddish language.

Richness of the language

The dictionary shows the historical developments and dialect differences in the entries, which encompasses topics from agriculture to zoology. Other entries deal with expressions and words that are found in contemporary and classic literature, newspapers, online publications and other text sources that have been used for a long time in private life, at home, in synagogues and wherever there are Jews speaking the Yiddish language, including tradesmen and professionals. Even regional variations of the language are included in the new dictionary.

The aim of the 826-page resource is to provide this ancient language with a facelift to make it adapt to the times – after all, it is a living language. It even led to the creators, Schaechter-Viswanath and Glasser, to invent new words, combining compound words with existing words in Yiddish. It's a production that's the result of very extensive research, with a lot of consultations with prominent members of Yiddish-speaking communities and the existing dictionaries and thesauruses still available.

An interesting inclusion in the new dictionary is flip-flops or ''fingershikh'' in Yiddish. It translates to "finger shoes." It was actually coined by Gitl Schaechter-Viswanath's sister, Rukhl Schaechter, when she was still a child. It was already adopted by the Yiddish community for a long time, and it's only now that it's going to get its official recognition.

Just like many languages, Yiddish has provided the English language with several words, which the world continues to use. Here are some of them.

The new Comprehensive English-Yiddish Dictionary is very well received, if the initial 1,200 copies that sold out quickly is to be a gauge. While this is a small feat, compared to other language dictionaries, it is still an achievement for a threatened language. There's another 1,000 editions currently in print, meaning response to the new resource is gaining momentum. When asked why he embarked on such a huge task, Schaechter-Viswanath said that it is something that he wanted to do for his children, the generations that will come after them, his colleagues and for himself. More importantly, he created this new dictionary for his father, an ardent linguist of their native language.

Bernadine Racoma is a writer, researcher, professional and multi-awarded blogger and new media consultant. She brings with her a rich set of experience in the corporate world, as well as in the field of research and writing. Having taken early retirement after working as an international civil servant and traveling the world for 22 years, she has aggressively pursued her main interest in writing and research. You can also find Bernadine Racoma at Google Plus.