There is nothing that gives you away as a newbie as much as inaccurate pronunciation of a language you’re learning. First impressions are very important and how you speak has quite the effect on how people understand you as you communicate with them. Plus, you will not miss those few people who hate it when you butcher their language, so it really is important that you learn the right pronunciation for every language. In this case, we are dealing with Russian and, to be honest, acquiring an accurate pronunciation of Russian is not easy. We will look at some of the ways that will help you get there.

The first step in learning a new language is learning the alphabet. Russian is one of the languages that use the Cyrillic writing system. It's a system widely used across Eastern Europe, North and Central Asia. As opposed to Chinese characters, the characters in the Cyrillic alphabet are not too different from the characters we use in the English alphabet. There are some letters which are silent, which makes it a little tricky since it changes the pronunciation entirely. Another thing to take note of is that the vowels in Russian are not always pronounced as they are written. Take a vowel like “o”, for instance, when in an unstressed position, it will sound a lot like “a”.

A good place to start is by memorizing all the letters of the alphabet first. Make a song about it if you have to but it’s a nice place to start. Afterward, you can start trying it out and working on phrases. Be keen on letters that mark sounds that aren’t found in English and seek help from people who have good command of Russian. Let them pronounce them for you since this way you will learn faster than if you were reading it from a book.

Details of the Russian alphabet

After you start working on phrases, it’s good to practice with some common courtesy phrases here and there. Learn how to introduce yourself, to excuse yourself, say thank you, to say goodbye, to ask for directions and things like that. It’s just a start, yes, but you’ll never get to the end unless you start somewhere, right?

You will need to be wary of consonant clusters in Russian. They are notoriously hard to pronounce especially for beginners who are native English speakers. The best way to get around this is by listening to as many Russian speakers as you can manage so that you can get it right. Also, note that Russian generally has many sounds that aren’t found in English. For instance, Russian has what is called ‘hard’ and ‘soft’ consonants. Soft consonants are pronounced with the front of the tongue sort of flattened against the front part of the palate while the hard ones are pronounced with the back of the tongue raised towards the back part of the palate. Again, the best way to learn the difference is to listen to Russian speakers.

When you’re learning a new language, you can get the words right and even write a short essay in that language after a few months of learning it, but something that doesn’t come easy is getting the right intonation. Most sentences in Russian have a downward final intonation, as opposed to some dialects, particularly English. English has an intonation that raises at the end of every statement so it will take a keen ear and some effort to ensure that you get it right in Russian.

Verbal conjugation could prove to be a problem for people who speak only English and haven’t learned any foreign language before. This is because verbs in Russian are conjugated as per the object, number, tense, person, and gender. This is typical for many European languages. It’s not complicated to understand, though. When it comes to perfective and imperfective verbal aspects, it’s quite tricky for a Russian learner to get. What happens in Russian is, every verb has two aspects and you choose what aspect to use depending on what action the verb refers to. These actions can include the likes of habitual actions, one-time actions, multidirectional or unidirectional actions, etc.

There can be a variety of word orders and it can get really confusing when it comes to more complicated sentence structures. Honestly speaking, word order falls into the category of the hardest parts of Russian to understand and master. It actually requires years of conversation practice and at some point, classes in linguistics. Fret not, however. You can get to Russian fluency as long as you understand aspects of case and verbs without having to go too deep into the details of word order change.

7. Immerse Yourself in the Language

You will learn more Russian if you immerse yourself in the language. Sitting down in front of a computer all day with PDFs and video tutorials will only take you so far. You need to do other things that will help you connect with Russian in different perspectives. You could surround yourself with Russian media. Listen to Russian poetry and songs, listen to Russian radio online, and watch Russian movies without subtitles, etc. You can even go that extra mile and change the language settings on your gadgets to Russian.

You can decide to read only in Russian. You can buy books, newspapers and magazines in Russian only. Translate English sites on your web browser to Russian, open Russian web pages, articles and read them. This will give you a visual understanding of the Russian language. You can also practice writing in Russian. Put pen to paper and write a short essay or even text a Russian speaker.

It’s important since writing is basically an output of the things that you’ve been learning. The more you learn, the better you write.

If you have the possibility, you can fly out to Russia for some time and learn the language. That too is an option.

For those of you who aren’t able to fly out to Russia or those who don’t know any Russian speakers, technology could have the solution for you. You could find a reliable language learning website to help you through it. Most of them are free anyways. You could seek professional help and sign up for online classes. Some of them are free while some of them come at a cost. Look for universities and schools that offer Russian courses and get studying. You could also go for the option of installing a language learning app. These days, there are apps for almost anything and you’ll find a few for your smartphone and tablet that can help you learn Russian. Some of them include the likes of Duolingo, AccelsStudy, Learn Russian, and Memrise.

You could join social media groups, there probably are some people with the same interest in learning Russian on, say, Facebook or Google+. You also have the option of meeting native Russian speakers online. It could be a stranger or someone you know but it could take you a long way too. 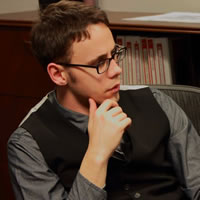 That said, Russian is not as hard as it’s sometimes perceived to be. The list does not end here, however. These are just but a few tips to help you get going. Follow these tips and have fun as you learn and experience a new language and culture. All the best!

Richard Nolan is a blogger and a private tutor, sharing his experience in spheres of blogging, self-growth, and psychology. Richard writes for numerous blogs and gives useful tips for bloggers, students, and teachers. You can learn more about Richard on Facebook, Twitter and Google+