Volapük was created by Johann Martin Schleyer (1831-1912), a German priest who lived in Grand Duchy of Baden, which has been part of Baden-Württemberg in the southwest of Germany since 1952. Schleyer claimed the idea for creating an international language was suggested to him by God in a dream. His aim was to create a language which was "capable of expressing thought with the greatest clearness and accuracy" (Sprague, 1888) and was easy for as many people as possible to learn. 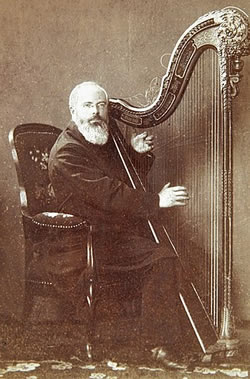 Schleyer published an article on Volapük in Sionsharfe, a magzine he edited, in May 1879. He published a book about the language in 1880. The name of the language means "speech of the world": vola is the genitive form of vol (world) and pük is derived from speak.

Schleyer based the vocabulary of Volapük on German, English, French, Italian, Spanish and Russian. He eliminated sounds that would be difficult for speakers of other languages to pronounce, and made most words one syllable. Few of the resulting words are easily recognisable. For example, blod is brother, flen is friend, vom is woman, and nif is snow. He also devised a complex set of grammatical rules for his language. Verbs, for example, can be conjugated in over 1,500 ways as they are marked for person, gender, number, tense, mood and voice, and nouns are declined for case and number. However the grammar is at least highly regular.

At first there was little interest in Volapük in the scientific and literary communities. Then in 1882 a society to promote the language was set up in Vienna. In 1884 interest in Volapük spread to Belgium and the Netherlands. By the late 1880s, there were Volapük societies springing up all over Europe, North and South America, Russia and parts of Asia. A number of periodicals in Volapük were published and conferences were held. The first International Congress of Volapük (Volapükakongred) was held in Freidrickshafen in 1884, the second in Munich in 1887, and the third in Paris in 1889.

At its peak, there were an estimated Volapük 283 clubs in many countries, 25 periodicals in or about Volapük, and 316 textbooks in 25 languages.

The International Academy of Volapük (Kadem bevünetik volapüka) was set up at the Munich congress in 1887, and its headquarters were established in Paris. The aims of the Academy were to preserve, improve and propogate Volapük, and Johann Martin Schleyer was its first leader (cifal). Other members of the Academy included Auguste Kerckhoffs, as business guide or director, and language specialists from twelve different countries.

In 1887 Auguste Kerckhoffs published a grammar of Volapük which differed significantly from Schleyer's version of the language. This lead to disputes between them. Kerckhoffs hoped that the third International Congress of Volapük, which he organised in Paris in 1889, would put an end to their arguments. At the Congress Schleyer's right to veto descions made in the Academy was removed, and as a result, he refused to recognise the authority of the Academy.

Also in 1887 that Dr L. L. Zamenhof published his first work on Esperanto, which soon became the international auxiliary language of choice for Volapük enthusiasts and many others.

Schleyer set a up a new Volapük Academy in 1890. It had 49 members, who were all loyal to Schleyer, and was based in Konstanz, in what is now southwest Germany. This academy appears to have done very little, apart from approve Schleyer's decisions, and became inactive in 1893.

In 1892 the International Academy of Volapük started making many changes to the vocabulary and grammar of Volapük. They replaced obscure words with more recognisable words based on Western European languages, and removed aspects of the grammar not found in European languages. By doing this, they realised that they were creating a new language, which they called Idiom Neutral (the natural idiom/language). The Academy became Akademi Internasional de Lingu Universal in 1898. A number of people got interested in Idiom Neutral and produced a periodical, dictionaries and a grammar. However in 1908 the Akademi abandoned Idiom Neutral in favour of Latino sine flexione, a simplified version of Latin.

Schleyer continued to work on Volapük until his death in 1912. In the 1920s, Dr Arie de Jong created a revised and somewhat simplified version of Volapük known as Volapük Nulik (New Volapük). He published it in 1931, and it was accepted by the few remaining speakers. There was a brief revival of interest in the language after that in the Netherlands and Germany, however Volapük was suppressed in countries under Nazi rule.

Since then a small number of people have continued to speak and use Volapük, and there has always been a leader (cifal) of the Volapük community. There is currently an active group of users on Facebook. Maybe 20 or 30 people currently speak the language.

Hear a recording of this text by Doug Vander Wel