Gaelic, and ancient language on Ardnamurchan and Rùm

Text and photos by Linden Alexander Pentecost, May 2021 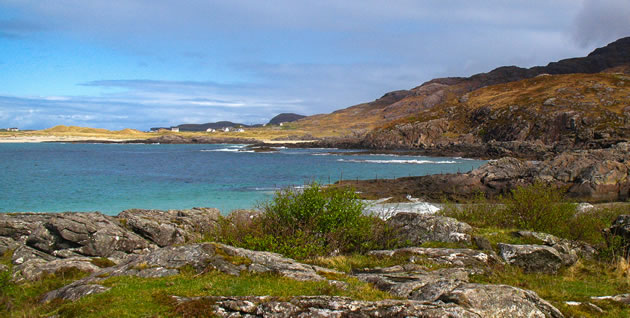 A coastal landscape of the Ardnamurchan Peninsula, Àrd nam Murchan. Ardnamurchan still has speakers of the native Gaelic dialect, which has a particular and striking prosody or ‘rhythm’, that may be in some way connected to the use of the glottal stop.

I feel that Scottish Gaelic dialects, and historic language in Scotland, make up a really really interesting subject to try and write about; but I also find it exceedingly difficult. Looking at the Celtic languages as their main, recognised individual languages, we get an idea of the variations and changes between them. But looking at the Celtic languages individually, and at their dialects, we see that they hold a great deal of diversity and variation.

Looking up Scottish Gaelic phonology online, will often bring up the pronunciation in the International Phonetic Alphabet, which is incredibly useful I think. But, what is shown is only a small percentage of the language's sound variations. Scottish Gaelic is one language, the grammar, and vocabulary are similar enough across the whole of Scotland. But the phonemic inventories, and prosody, can vary greatly.

I’d like to talk a little about the Gaelic of Ardnamurchan, it’s a dialect I find particularly interesting. Ardnamurchan is a peninsula, the most western part of the Scottish mainland. It is not far from the Isle of Mull, or from Mallaig to the north, and the peninsula is separated in the south by Loch Sunart, which has its own, slightly different dialect of Gaelic. The dialects of Strontian and Loch Sunart have a noticeable prosody, similar, but at the same time, distinct from that of Ardnamurchan. The peninsula’s Gaelic dialect has a distinctive prosodic pattern, which may be, in my opinion, connected to the use of the glottal stop. A Danish friend, Marc Daniel Skibsted Volhardt, and I, thought that the prosodic pattern sounded a bit similar to that of West Jutlandic.

Among other differences, Ardnamurchan Gaelic is known for turning the broad, velarised l into [l̪ˠw], in words like latha ‘day’, laogh ‘calf’, balach ‘lad’. In many words, the glottal stop may appear medially between the vowels of two syllables, like in gobhar ‘goat’, being pronounced [goʔəɾ]; other words carrying the glottal stop, include leigheas ‘a cure’ and a-rithist ‘again’. The glottal stop can also cause the following syllable to cross a word boundary onto the first syllable of the following word. Another feature of the dialect, is that the long à is also pronounced as /ɛː/ in certain positions, such as màthair ‘mother’, làn ‘full’

It is impossible to say how old these prosodic features are in Gaelic. But it is possible that they show us something of the deeper linguistic history in that area, perhaps showing us whatever came before the Gaelic dialects as we know them. Glottal stops aren't unusual in the Argyll Gaelic dialects, but Ardnamurchan dialects seem to have embedded the glottal stop as an important feature in the prosody and general flow of words. I hope to do more research into this in the future, and I hope I can generally encourage more research into Gaelic dialect prosody

Not far from Ardnamurchan can be found the Small Isles, Canna, Muck, Rùm and Eigg. Rùm rises from the sea, like a castle of volcanic rock, between the ocean and the sky. When I see the island, I feel deeply emotional. Even though my ancestors are not from there, I feel a great care for it. Rùm's indigenous population were treated terribly in the last thousand years, being attacked and then evicted. Now, there is no native Rùm Gaelic spoken on the island.

Indigenous people have been on the island since the Mesolithic time, where they quarried bloodstone from Bloodstone Hill. This rock became later associated with the Northern Lights, known in Scotland as the Merry Dancers; some depictions of the Merry Dancers or, Na Fir Chlis depict them as signifying battle. But, from a pre-Christian perspective, mythology about the Northern Lights often connects them with ancestor deities. So perhaps, in the Mesolithic time, Bloodstone Hill was a place where 'the ancestors touched the earth'. But that is pure speculation of course.

I think that the vibes we feel in our body can often help us to read the more subtle geometry and light of an experience, even when our other senses might be captivated or dillusioned by what we think we are seeing in these contexts. Our conscious mind often seems unable to understand this ethereal language of vibes, our mind can often only interpret it. Our body can understand it though, and often tells us when it’s not safe in these contexts.

Note that Na Fir Chlis or Merrydancers were in some ways feared in Scottish mythology, and there is a lot of folklore across Northern Europe suggesting that we can become self-diluded by the light. The meaning of this I am unsure, but, perhaps like sailors and their respect for the sea, we should respect these ancient places and their cultures, and leave if we feel we should.

I wrote before about the possibility of cognates, that might show us more about our ancient languages. One such proposal is that the name Rùm is of Afro-Asiatic origin. I think this is interesting, but if correct, I don't think that it means that the language spoken on Rùm 'was' necessarily, Afro-Asiatic, but rather it shows what might be a connection of sorts; Richard Coates proposed a name, based on a Proto-Semitic root *rwm, a 'height-word' (references 1, 2). But, this is not the first time that connections have been made between Celtic and Afro-Asiatic. I ponder if perhaps the ancient language, shared something with Afro-Asiatic, and with Celtic as we know it today. It may have been pre-Indo-European, or, it may have been related to Celtic and to Indo-European, in the way that we don't yet understand.

Recently, I decided to have another, closer look at Indigenous American languages, and I would like to say that I acknowledge the First Nations peoples, as the rightful owners of their languages, cultures and lands. My curiosity about these languages and cultures comes from my appreciation and awe of them. When learning about Salish languages, another language family that often employs a verb-subject-object order like Celtic, certain words stood out to me as being familiar; like sVmVł- ‘fish or salmon’, łVxw ‘a pool in a river’, sVtV(n) ‘tree’, sVl- ‘saltwater, sea’, sVwl ‘wind on sea, swell’, wVlVl ‘rain’, sVnx- ‘sun, day, light in sky’. The word for ‘tree’ looks rather like the word ‘stump’ in English, wVl reminds me of the Welsh words ‘gwlyb’ ‘wet’, and ‘glaw’ ‘rain’. The words łVxw and sVl- are quite comparable to the Gaelic words loch ‘body of water’ and sàl ‘brine or salt water’.

The words in Europe are Indo-European in origin, and yet, could there also be something far more ancient, that connects indigenous languages in the Pacific Northwest, to the first languages of Europe? It is quite wonderful to think, that perhaps my ancient ancestors, spoke some of the same words as other indigenous peoples around the globe. I think that would be a beautiful thing for us to share. Whatever the truth though, these Salish words belong to the Salish speaking peoples, and I think we will only understand the vastness of our languages, when, at a global level, we are ready to listen to indigenous peoples, and to let them teach us as how to reconnect with our world and with ourselves.

The Salish examples here are effectively my own reconstruction of the proto-language, the words I studied came from several languages, and these examples are an attempt at transcribing their basal phonetic value. I am grateful to speakers of these languages for having shared these words with me. 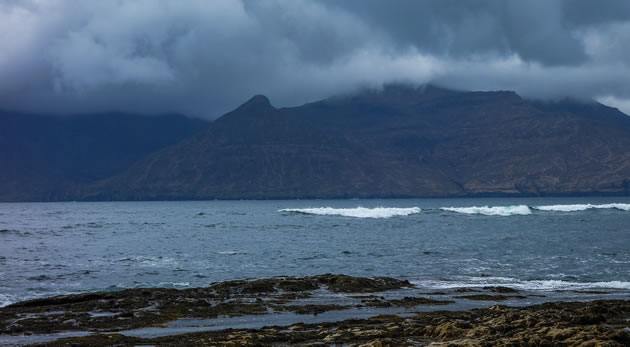 The Isle of Rùm, seen across the sea from Eigg. This island is ancient geologically and archaeologically, with the earliest evidence of human activity, dating back to at least nine thousand years ago. Since then, the island’s indigenous people were victims to a massacre, when, in 1588, Lachlan Mór attacked the Small Isles, helped by part of the Spanish Armada. The descendants of those that survived, or who later settled on the island, were completely evicted from the island during the Highland Clearances. It is unknown when people began speaking Gaelic here, but evidence of an older, ancestral language, may lie in the name of the island itself.

The Gaelic spoken on Eigg, close to Rùm, shared things in common with Ardnamurchan Gaelic, but on Eigg, words like latha, laogh, were pronounced with [wl̪ˠ] instead of [l̪ˠw]. How Gaelic was spoken on Rùm is more of a mystery, and clearly, more research needs to be done into the Gaelic of Rùm, and into the elements of the island’s language that may be ancient.

Rùm's history has been horrific over the past thousand years, with the indigenous population being put through, what was essentially cultural genocide, for them to have then had their island taken from them. Today, if visiting the island, one is sadly unlikely to encounter information about the island's indigenous people. I hope that by writing this, I honour those people in the way that they would want to be honoured. However, I mean no offence towards the present population of the island, who I feel already honour those ancestors, and the island's heritage, by taking care of the island and its ecosystems. I hope that this article further outlines the importance of this, and the responsibility we have to the land, wherever we live.

Even though the indigenous people were pushed away from their island, I feel that those ancestors are very much still there. The only way I can describe it, is as a kind of an ancestral presence. A spiritual presence, beyond time and space, but also within the island itself, as though the ancestors are in the mountains, and the seas and skies, staring and watching; perhaps waiting for us to see them.

May we always have respect for the ancestors and for the beautiful nature around us. I thank the ancestors of this place for what I feel they have taught me.

Recordings of Gaelic dialects can be found on the website Tobar an Dualchais. For example, Angus Cameron from Lochaber speaks with a similar prosody to the Gaelic of Ardnamurchan.