The Baltic Sea was in ancient times a highway of cultural and linguistic contact. In the present time, the languages spoken around the Baltic Sea include German, Danish, Swedish, Finnish, Estonian, Lithuanian, Latvian and Polish. 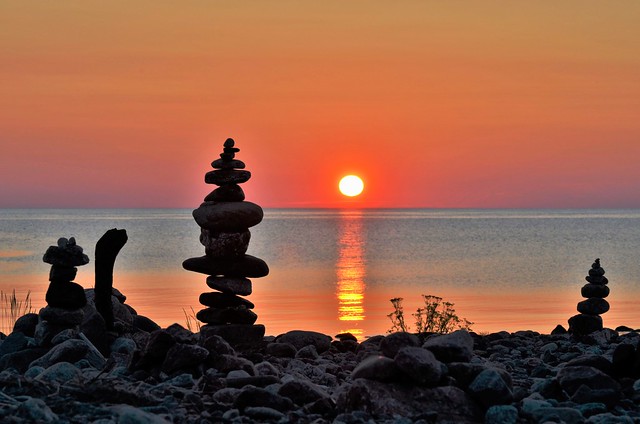 But, in terms of North-Germanic languages or dialects we can talk about a rather wide range of different dialects or 'languages', which have in more recent times largely succumbed to the dominant language in those regions. Some of these traditional languages are considered 'Danish' and others 'Swedish', although in many cases the dialects in question may have developed separately from more standard Danish and Swedish since ancient times.

Sometimes this is more obvious, for example the Old Gutnish language on the island of Gotland was already clearly distinct from Old West Norse and Old East Norse, although today modern Gutnish dialects are often called 'Swedish' (although from a linguistic point of view they are very distinct from dialects on the Swedish mainland).

Åländska on the Åland islands is different in that it is completely mutually intelligible with Swedish, but like Gutnish it also has important distinctions, which might imply that it developed somewhat differently to Swedish in Sweden from the earliest times.

Note: the words given below as examples are given on the website Peter Skautrup Centret for Jysk Dialektforskning by Aarhus Universitet, in the section Danske dialekter ’Danish dialects’. The examples below are from two recordings from the island of Fyn, one is of West Fynsk/Vestfynsk, from Særslev, the other is of East Fynsk/Østfynsk, from Skellerup. The words from this source are given followed by (2). These words are from phonetic dialect transcription of Fynsk dialects available on this website. The only difference in my writing is that I indicate nasalisation with a tilde accent over vowels, whereas on this website it is indicated in italics. More generic information about Fynsk comes from what I have managed to learn generally by studying Danish dialects.

The island of Fyn, or in English Funen, is the second largest island in Denmark, and stands at the western edge of the Baltic Sea. Whilst it is perhaps incorrect to say that Funen is a Baltic Island, it borders both the Baltic Sea in the south and the Kattegat Sea in the north. There are approximately three different Fynsk dialects, West Fynsk/Vestfynsk, East Fynsk/Østfynsk and Southern Fynsk/Sydfynsk. Often the Sjællandsk Danish stød can appear in different positions in Fynsk Danish, and additionally more southern parts of Fyn have a pitch accent, similar to the pitch accents in most Swedish and Norwegian dialects. Generally speaking traditional Fynsk sounds distinctly different from more standard colloquial Danish.

This helps to give Fynsk a very distinctive sounding melody, although sadly nowadays the traditional Fynsk language is becoming slowly replaced by variations of more standard Sjællandsk Danish. The more standard colloquial Danish in Denmark being generally much closer to the dialects of the island of Sjælland, where lies the capital of Denmark, Copenhagen.

There are other important distinctions regarding Fynsk Danish. For example the Danish medial d, which is pronounced in more standard colloquial Danish as a voiced dental fricative like sound /d/ is generally dropped in Fynsk, for example Sjællandsk tider – times, time periods, Fynsk te:jer (1) (Vestfyn, Særslev), Sjællandsk smeden – the smith, Fynsk sme'i (1) (Vestfyn, Særslev). The dropping of intervocalic d is also found frequently in Jutlandic dialects of Danish. Note that ' here represents the stød.

Other than the pitch accent, perhaps the most noticeable feature of traditional Fynsk is nasalisation. The n in Danish is frequently dropped in certain words, but in Fynsk this happens more commonly, and causes nasalisation of the previous vowels and semivowel j. For example:

The reference (2) refers to information available on 100 svenska dialekter idag!, a website which contains many examples of Swedish dialects. The examples I give are from the 'older male speaker' / 'äldre man' of the Brändö dialect. Note that Åländska does have east and west differences, so the eastern parts of Åland have language that is in some ways closer to Finland Swedish dialects more generally. Brändö is in eastern Åland.

Åländska is the Swedish name for the Swedish dialects on the Åland islands, an autonomous region of Finland which is almost entirely Swedish-speaking. The Åland islands (in Finnish: Ahvenanmaa) are a beautiful and majestic archipelago of relatively flat islands, forests and beaches, with craggy areas of reddish orange granite. Åländska is less distinctive from Stockholm Swedish than the Ostrobothnian dialects of Swedish in Finland, perhaps because Åland is so close to the Stockholm archipelago, and can in a sense be thought of as a continuum of the dialects in Sweden towards Finland.

Åland has been occupied since at least the Neolithic times (See, for example: Clay figurines from the Åland islands and mainland Finland - by Milton G. Nunez). I think personally that it's possible that at least some of the linguistic traits and words in Åländska may date from that period, but this is purely speculative of course.

Some of the key features of Åländska include:

1. Substitution of Swedish 'det' - 'it' for he (2) (Brändö, older male speaker). This is also found in Westrobothnian for example and could be an ancient feature of Baltic North-Germanic dialects. For example Åländska he var - it was, Stockholm Swedish det var. With regards to det and he, it seems that these two words are in free variation in this dialect, with the 'older female speaker' from Brändö on this website having only det.

2. Lack of pitch accent. Unlike most dialects of Swedish, the Åland dialects do not possess a pitch accent. Although nevertheless they are beautifully musical to listen to.

4. The pronunciation of till – ‘to’, ‘til’ is written tell (2) (Brändö, older male speaker). A similar change occurs in Northern Norwegian, where for example people in parts of Nordland might write tell for Bokmål til.

More generic differences in Åland Swedish include a certain degree of apocope, audible in the language of the elder Brändö male speaker, and also in for example a preference for int – not, Stockholm Swedish inte (3)

The Stockholm, Åland and Turku archipelagos are very interesting linguistically speaking, in my opinion. Close to Turku for example is the coastal district of Rauma on the Finnish mainland, which has its own unique dialect of the Finnish language, Finnish: Rauman Murre, Rauma dialect: Rauman Giäl.

The Malax language is a variety of Ostrobothnian Finland Swedish, spoken around the area of Malax on the west coast of Finland, in Finnish this area is known as Maalahti. The language seems to be known locally as Malaxsprååtje or Maalaxsprååtje, Stockholm Swedish Malaxspråket.

I have previously written about the Malax and Närpes dialects of Finland Swedish, but for this article I have employed the source: Maalaxsprååtje Dialektord från A till Ö, samlade och kommenterade av Siri Hagback. This is available as an online ebook at https://museum.malax.fi (Malax museiförening r f, Nina Sten, ordförande). This is where the examples below originate, given here as (4)

As in Estonian Swedish, the second person singular pronoun is generally tu in Malax, rather than Stockholm Swedish du. The form du is found throughout most other North-Germanic languages. The use of tu is evidenced from examples in the book resource given above.

Estonian Swedish, known in Swedish as Estlandssvenska, and in Estonian as Rannarootsi Keel refers to the ’Swedish’ dialects of coastal parts of Estonia. This language is today not in a good state, there are very few speakers and from what I understand some of the dialects are now nearly extinct. One example is the dialect of the island of Ruhnu, in Swedish Runö. I have asked people on this island if there are any speakers of the dialect left, and from what I understand there are no native speakers on the island now, but there may be a few speakers who have moved to Sweden. From what I understand, these speakers are all elderly, and doing any research on the dialect now, and tracking down these speakers would prove extremely difficult I think, and I am worried that doing any research would seem intrusive upon those elderly speakers.

This is such a sad situation that it almost brings me to tears. And in my opinion, teaching standard Swedish on these islands as a substitute would not be sufficient. The Estonian ’Swedish’ language is significantly different to the Swedish spoken in Sweden, not to mention that the Estonian Swedish culture is a unique culture. I love the Estonian language and the South Estonian languages (Võro, Seto), but it is very sad that this Nordic language is quietly disappearing from history.

Some years ago, I wrote a little introduction to Runö Estonian Swedish under a pseudonym. I based this introduction upon information in the book Ordbok Estländsk-Svenska dialektarna och Runömålet by Herman Vendell (5).

The first part of the book, which is a more general dictionary, gives many examples of Estonian Swedish words. Like in Finland Swedish generally, there are diphthongs, for example stäin (5) – stone, for Stockholm Swedish sten, häim (5) – home, Stockholm Swedish hem.

Further information on these languages by the author:

On my website The book of Dunbarra there are some free ebooks under the section ”New books from June 2022”, including:

1 Languages and dialects of Northwest Europe, and their heritage – this book contains information about, and examples of the Pite and Lule Bondska dialects, as well as wordlists for the Malax and Närpes Finland Swedish dialects, and a little information on modern Gutnish from the Baltic island of Gotland.

2 Language and land – minority and indigenous languages and dialects from different parts of the world – this book contains more information about the Lule Bondska language, and Rûn lesson one – an introduction to the Estonian Swedish of the island of Ruhnu. This book also contains an introduction to the Bornholmsk Danish dialects on the Baltic Sea island of Bornholm.

Further information on Nordic languages around the Baltic Sea

2. Gutamålsgilde / Gutamålsgillet - this is a fantastic website, full of information about the modern Gutnish language on the island of Gotland

3. On facebook there is a group called Närpesiska ord och uttryck for the Närpes dialect of Finland Swedish.

5. Utkast til ortografi över Skånska Språket - med morfologi och ordlista - by Mikael Lucazin. This book is I think available online, written by Mikael Lucazin it gives a detailed description of the Scanian or Skånska language, as represented in a specialised orthography.

6. Persnäsportalen på Öland - this is a detailed wordlist for the Swedish dialect of Persnäs on Öland. Öland is a long island in the Baltic, not far from the Swedish mainland near Kalmar, and like Gotland has a lot of limestone landscapes.Öländska dialects also have many unique features and words.