Pre-Celtic elements in the Goidelic languages

Raised beach on the island of Jura, close to Oronsay and to Corryvreckan. These haunting places still show the pattern of the waves and tides, as they were back in the Mesolithic around nine to ten thousand years ago. People probably arrived after the beaches started forming, living off the sea and off the wild animals in the forests. These people are distant into the past of Scotland, but could they have lived on in culture and language? (photo by Linden Pentecost)

I ask kindly that my readers respect the Daoine Sidhe and their places. Their places are in a way their houses I feel, their abode, and if it feels somehow wrong to be in one of these places, we should leave.

The Goidelic languages, Irish, Manx and Scottish Gaelic, contain a few words that might be pre-Gaelic, possibly pre-Celtic even. For example, Gearóid Mac Eoin proposes the place name Faffand, among others. This is an interesting name, and is rather heavy on the 'f' sound. And that's a thing about the pre-Celtic looking words, they contain a lot of 'f's and 'p's, neither of which were in the earliest form of Irish. Gearóid Mac Eoin also suggests the words for straw, slife and strophais. These words are rather similar, but if they are the same word, it's strange because sl and str don't usually change with each other in Celtic languages. The p and f variants are also in another word proposed by Gearóid Mac Eoin, cuipre/cuifre for 'kindness'.

Peter Schrijver gives the word prapp meaning 'rapid', which reminds of the word tapa in Irish, which means 'fast.' It sounds similar, but this pr is present in the word prapp. Peter Schrijver also suggests the Irish word gliomach for a lobster, this gl also seems attached somewhat mysteriously. In Manx the word is gimmagh and in Welsh, cimwch.

A lot of these substrate words are connected with the sea, and it makes me think about some of the places in Scotland I have visited, where one can find shell middens from the Mesolithic era. Shellfish and the sea were obviously very important to those people, and it makes me wonder, how much of their culture is still in the Goidelic languages, and in their traditions about the land?

Many of the shells on these middens are limpets. 'Limpet' is bàirneach in Scottish Gaelic; there is also an interesting word for 'cow fetter', buarach. This word also meant 'stomach of limpet' too (from Am Faclair Beag). Now, curiously, one of these shell middens is called Sìthean (sidhe mound) Bhùraich Bharaich. The first word is bùrach, a mess or heap, which seems to have a rather wide range of meanings, like several of these unusual words. The wide range of meanings might be suggestive of unknown patterns, present in the meaning of words across dialects.

The second word is barrach 'top', so we might have 'sidhe mound of the top heap/mess'. The thing that makes me really interested in this name, is its musicalness. The whole connection between daoine sidhe and music, and that both of these words bare some closeness to bàirneach and buarach; and with the mounds themselves being made mostly of limpet shells.

This midden is on the island of Oronsay, and I wonder if the musicalness of this name is in memory of the folk beliefs of these early people. The sea was very important to the Mesolithic people, and building these mounds, and spreading the shells could have conveyed a ritualistic meaning, to a sea deity perhaps? 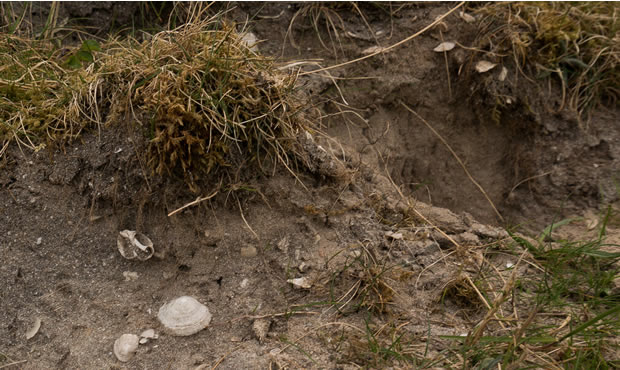 Limpets and other shells on the surface of a shell midden, a Mesolithic rubbish dump and/or ritual site on the island of Oronsay. (photo by Linden Pentecost)

Not far from the island of Oronsay is the Gulf of Corryvreckan, and a local legend talks of the Cailleach Bheur. A cailleach is sometimes translated as 'witch' or 'hag', but a more accurate and less patriarchal view would be to call them nature goddesses of a type. This particular cailleach at Corryvreckan washes her plaid in the gulf, which at the right timing becomes a giant whirlpool. I have wondered if the cailleach at Corryvreckan is linked to the traditions of the Mesolithic people, and how they could might have seen certain goddesses present in certain places, linked to the forces of weather and of the sea. These ancient people teach us that we should let nature be wild, and not seek to control her power.

I haven't been able to get any further with this line of research, I don't have the skill or expertise. I have been curious about this for some time, and when I was reading about the Islands recently, I started to wonder, and found out what I could. Somebody might be able to compare these words to look for more information, maybe even for 'cognates', but finding them might not be easy, or likely even. Other languages might share no words at all with those ancient to Britain and to Ireland. But something of the languages could remain, and perhaps it can tell us something, of the deep connection we share with our environment and landscapes.

When I am writing kl, pl etc these are approximates in English spelling, and don't represent the exact Gaelic pronunciation, which is often very localised.

This work can be copied, archived or reproduced commercially if I am accredited. Originally posted on Omniglot.

Linden Pentecost works as a photographer and with the environment in south east Scotland. He has studied Gaelic Christianity and the Celtic languages and is particularly interested in Breton, Manx and Rathlin Irish. He can also speak Welsh, Irish and Scottish Gaelic relatively well.