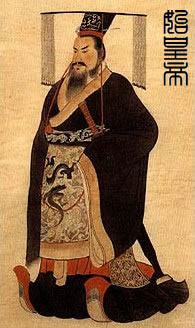 Cultural heritage is of utmost importance in China, and Chinese people are very proud of their history, at least most of it (I'm not sure if anyone can fondly remember anything about the period of Opium wars in the end of the 19th century, for example).

Aside from those unlucky couple of decades, in the eyes of Chinese people, the rest of their history can only be described as glorious, magnificent and other adjectives of the sort. Chinese history is indeed long with the first (proven) written records dating back to 26th Century B.C., but if you want to know who really started it all, which united China for the first time, shaping it into the figure of a China we all know today, then look no further. The answer is: Qin Shi Huang.

Discovered by a group of farmers digging for wells in the dry countryside in the vicinity of the modern day city Xi'an (西安) in Shaanxi (陕西) province, his tomb is guarded by no less than eight thousand life-sized terracotta soldiers (兵马俑 bīngmǎyǒng).

Although some of them have been damaged or suffered from discoloration, these soldiers, each unique in their features, are nonetheless impressive and are currently one of the biggest tourist attractions in China. But a man is more than just his grave, and to understand his importance in Chinese history, we will have to go back in time.

Before China was known as China, the unified geographical and political unit we know today, it was separated into hundreds of small states with their kings and warlords fighting for neighboring lands.

These were the times when military thinkers like Sun Tzu (孙子 Sūn Zi) were born, a time of wars and great political instability. This period of Chinese history became known as the Spring and Autumn Period (春秋时代 chūnqiū shídài 777-476 B.C.). By the end of this era, seven of the strongest counties emerged and then began the period of the Warring States 战国时代 (zhànguó shídài 475-221 B.C.).

In 259 B.C. Yíng Zhèng (嬴政), the man who was to become the first Emperor of China was born. By the age of thirteen he had already become the king of his country Qin, and had, among other difficulties presented by the era he had lived in, managed to deal with his conspiring mother, her lover and the prime minister of his own country, who all plotted to revolt against him.

After dealing with them at the age of twenty, he ruthlessly and efficiently waged a war against each of the remaining six states and finished them all, crowning himself the first emperor of China in 221 B.C.

The Great Wall of China

Less than two decades after becoming the leader of the Qin kingdom, Qin Shi Huang managed to do something no one had ever done before: in 221 B.C. he defeated the last leader of the remaining 6 countries and united China for the first time.

It was then that he actually changed his name from Yíng Zhèng (嬴政) to emperor Shi (始皇帝 Shǐ Huángdì) and started to rule his legalist state. Legalism (法家 fǎjiā, lit. "The School of Law") is a school of thought that believes that everyone should be equally treated under the law and that breaching the law will be punished severely. This strict authoritarian rule spurred Qin Shi Huang to become the most tyrannical ruler of the time (in an otherwise particularly ruthless environment).

After successfully defeating the leaders of the other kingdoms, his enemies, the Emperor did not stop. He turned his attention to the north of China where invaders were trying to push into his country.

Determined to stop them, Qin Shi Huang ordered to start the construction of the Great Wall of China (万里长城 wànlǐ chángchéng, "the wall of 10,000 Li" - which translates to 5,000 km).

What was only a collection of forts placed at various parts of the border, the Emperor ordered these to be connected into a continuous wall, a project which gradually involved more than 300,000 people. Unconcerned with the hardships the common people working on the wall would have to endure, his project cost the lives of thousands upon thousands of people and was given the nickname of the longest graveyard in the world.

This was also the inspiration behind one of the most popular folk tales today, called 孟姜女哭长城 (mèng jiāng nǚ kù chángcheng), or Meng Jiang mourns the Great Wall.

The legend talks about the beautiful wife of a farmer who was taken away to build the Great Wall on the night of their wedding.

Hearing the horrible stories about the Wall and desperate to keep him alive, Meng Jiang Nu travelled for miles and miles bringing winter clothes for her husband. Upon arriving there, she heard that her husband had already passed away....

Broken hearted and inconsolable, Meng Jiang cried for days until the wall collapsed. Among the bones previously covered by the wall she dug up her husband's bones and buried him.

The dynasties following Qin continued the colossal project. The majority of the stones and bricks you see at the Great Wall of China today dates back to the Ming Dynasty (1368-1644).

The Rise and Fall

Apart from the Great Wall, Qin Shi Huang is also remembered for ordering the first standard method of writing Chinese, which has made communication throughout China much easier.

He also standardized weights, measures and developed great trade routes, which helped to spread the influence of Chinese culture well across the country's borders.

Qin Shi Huang was determined to keep one unified and powerful China.

To ensure that no other ideologies of the time would threaten the system, he ordered the burning of most books -- the only books that were not destroyed were the ones pertaining to his own state, Qin (秦 Qín).

But he did not just stop at books. Supposedly he also ordered the execution of several hundred Chinese scholars, with executions being done in a particularly cruel way (this has not been proven though and some historians credit this vicious allegations to Confucian scholars (儒家 rújiā) following the period of Qin).

There was one human life which he cherished beyond all and that, of course, was his own.

Qin Shi Huang became obsessed with the idea of immortality and worked to fulfil that idea -- during his rule, he would send numerous expeditions to search for the elixir of life, that would allow him live forever...

Not many of them returned, afraid that the ruthless Emperor would punish them mercilessly.

After several attempts were made to kill him, the already paranoid Emperor became even more determined to cheat death. Afraid that the assassins might one day succeed, he arranged for people who looked like him to be in different places at the same time, so that a potential assassin could never really be sure where the Emperor actually was.

He worked with numerous alchemists to find the potion that would make him live forever. Ironically, it was the ceaseless pursuit of immortality that was said to have actually shortened his life in the end.

It is believed that he died as a result of trying one of these miraculous potions (a mixture of mercury and arsenic). After his death, the empire crumbled...

Other rulers seized power and killed his sons. Four years after his death, the empire fell apart.

Today, Qin Shi Huang's body rests in a giant tomb close to the city of Xi'an, guarded by the world-famous terracotta army. But the legacy of this controversial man is much more than that. As a strong, tyrannical ruler, he paved the way for Emperors that followed him to rule a single nation of Han people.

Rui Zhi Dong is founder and host of LearnMandarin.com.au - an Online Video Course for Beginners of the Mandarin Language