The Cypriot syllabary was used in Cyprus from about 1500 and 300 BC and is thought to have developed from the Linear A. The earliest known inscriptions from between 1500 and 1200 BC are in an unknown language called 'Eteo-Cypriot', or 'True Cypriot', and the script in which they are written is called Cypro-Minoan.

From around 1200 BC Cyprus began to be colonised by Mycenaean, Minoan and possibly Cretan Greek settlers, and they probably adapted the existing script to write their own language - the oldest known inscription in Greek dates from the 11th century BC. Cypriot Greek had much in common with Greek dialects of Arcadia and Pamphylia, which corresponds to the province of Antalya in Turkey.

Most early inscriptions were short texts and dedications on funerary objects, though some longer texts appeared during the 5th century BC. Some later inscriptions, particulary those from Paphus and Soli, are in the Cypriot script and in the Greek alphabet which helped with their decipherment. As a result of Alexander the Great's programme of Hellinization the Cypriot script was eventually replaced by the Greek alphabet during the 4th century BC.

The decipherment was started in 1871 by George Smith, who was later assisted by S. Birth, and was initially based on a bilingual Phoenician-Cypriot text on a bronze tablet from Idalium and dating from 480-470 BC. Other scholars, including Brandis, M. Schmidt, Deecke and Siegismund also worked on the decipherment, which was complete by 1876. 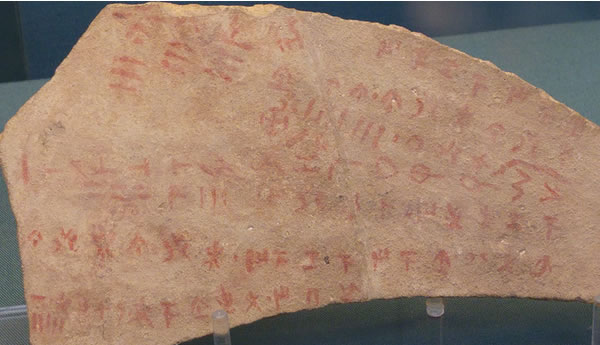 Photo by Simon Ager, taken in the British Museum.