Hebreísmo was created by Crawford J. Bennett, Jr. to write Castilian Spanish with Hebrew Letters. The Hebreísmo letters are modified for a handwritten alphabet wherein each letter fits into a "square," that is each letter takes up relatively the same amount of space on a page as any other letter would. However, Castilian orthography must be simplified to write in Hebreísmo. Hebreísmo is written from right to left, and vowels are always written.

Sample text in the Hebreísmo alphabet 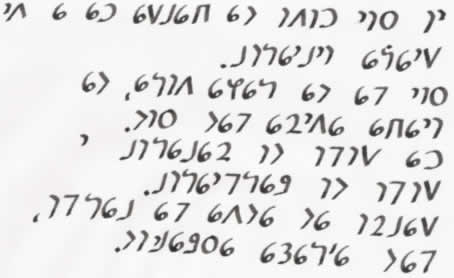 If you have any questions about the Hebreísmo alphabet, you can contact Crawford J. Bennett, Jr. at joendenise@verizon.net.