Þlaéhl [θlaˈe:hl] was devised by Anthony Hilton to write his invented language Чlalmwae [ʈlalˈmwa:e] with a series of knots in cords. It was inspired by the quipu or khipu, an ancient record-keeping system based on knotted chords that was used by Andean peoples such as the Inca in South America from the 3rd millennium BC until about the 17th century AD. It is part of a larger world construction project that Anthony has been working on since 2011.

In Þlaéhl vowels are primary and consonants are secondary, unlike writing systems such as abjads and abugidas, which make consonants primary.

A knot is a vowel: the center of a syllable. 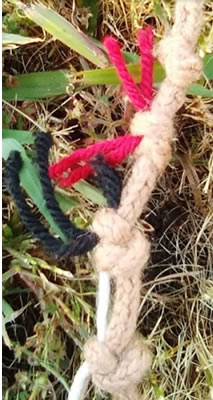 Pictured, a word ‘itemoya,' selected because it features the four vowels in “alphabetical” order. (Trivially, it means ‘to inhere.') The noose, not pictured here, is very easy to spot. See it as the top-left most knot in the Article 1 picture.

One reads each line of knots downward.

It may actually be easier to feel than to see the differences in the knots, though the visual learning curve doesn't take long. 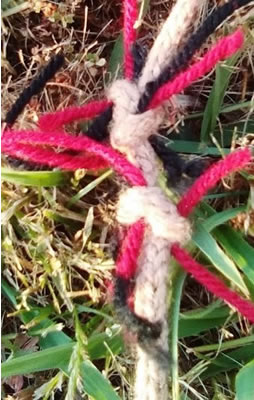 The picture above shows the word ‘concwel,' ‘to thank, to attempt to deserve.' With the two left consonants (both II: c), the red is higher than the black. In the top right consonant, (II: n) the black is higher. In the lower left consonant (still c), the two piles are tied together, spelling cw-. See below.

Knots in piles indicate the only three consonant blends.

Texts often wrap around a frame; knots don't go in books or scrolls. One usually reads with one's hands and eyes both, especially to hold cords straight.

Each line tends to the same total of spaces and syllables. 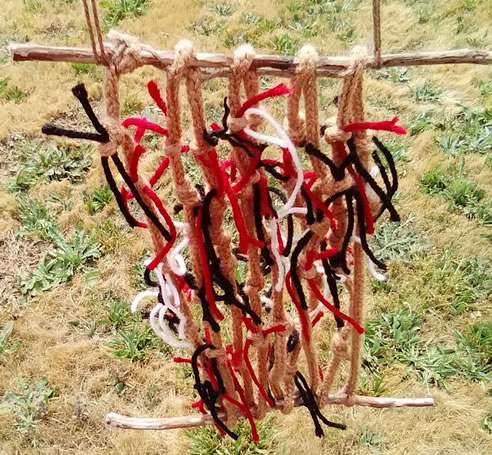 If you have any questions about this script, or other scripts invented by Anthony Hilton, you can contact him at: 831ACH[at]gmail[dot]com