On Language, Thought, and Mind 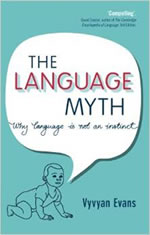 There are not many superb books that are certain to quickly become classics. One of them is The Language Myth - Why language is not an instinct (Cambridge University Press) by Professor Vyvyan Evans. Just published, the book can be read at several different levels.

At its core Professor Evans attacks the long dominant view in linguistics that human beings possess a hard-wired concept of language. What he disputes is that knowledge of language itself - the language software - is something that each human child is born with, essentially a rudimentary body of grammatical knowledge written into human DNA. The idea, called Universal Grammar, was created in the 1950s by MIT linguist Noam Chomsky and remains enormously influential. It is the standard view in most textbooks. And Chomsky has many followers.

But we now know much more about how children acquire language, the diversity of the world's languages, the evolution of the human species, the structure and function of our brains, and the ways in which other animals communicate. In writing about these topics, Professor Evans, who teaches at Bangor University in north Wales, argues, successfully in my view, that Chomsky's argument that language is innate, a type of unique human "instinct" pre-programmed in us from birth is, well, a fallacy. Professor Evans says that language is achieved by use, children learn it from their environment, animals communicate according to their needs, and language is too diverse to be governed by universal principles. He specializes in cognitive linguistics, whose foundation is the belief that that language develops and is sustained through our daily experiences and interactions.

At another level Professor Evans shares his fascination for the variability of language. Spoken languages vary widely in terms of distinct sounds they use. They also differ over the word order used, for example, subject, verb, and object, with all of the possibilities imagined. English uses a common subject (S), verb (V), object (O), with adverbs (AV) and adjectives (AJ) following the rules of our grammar lessons. But other languages can be very different. Unlike English, there are languages that lack adverbs, and some, such as Lao (spoken in Laos and parts of Thailand) lack adjectives. Then there is the Inuit language Inuktitut, which builds sentences out of prefixes and suffixes to create giant words.

In Jiwarli, an indigenous Australian language, the components of the English sentence "The dog bit the funny postman," might be "That postman bit dog funny." Many languages use word order to signal who is doing what to whom. Quechua, spoken in South America, uses grammatical markers added to sentences to indicate how confident the speaker is of a particular assertion, and how they learned of it.

Some languages feature grammatical categories that to me at least are very different. The "ideophone" is an example, a grammatical effort to enrich a narrative by integrating different sensory experiences arising in a single action. An example is ribuy-tibuy, from the northern Indian language Mundari, which describes the sight, motion, and sound of a fat person's buttocks as he/she walks.

It's an easy conclusion that Professor Evans believes that the way a language encodes space, time, color, or, as in Mundari, sight, motion, and sound, has profound consequences for how its speakers perceive those domains of experience in their everyday lives. Thus, Professor Evans goes some distance to rehabilitate the work on linguistic relativity of the American linguist Benjamin Lee Whorf, writing in the 1940s. Evans shows how the Chomsky disciple Steven Pinker (The Language Instinct) takes on untenable and extreme version of what Whorf, in fact, said and then shamelessly pokes fun at a straw man.

"If you thought that academics play nicely, and fight fair, think again," writes Professor Evans. Sure to whip up a storm, this book is a wide-ranging polemic. "Stay tuned" seems an appropriate admonition. There are, of course, lots of books on languages, and some are, of course, very good. This one is among the best, both to read, to think about, and, frankly, to be treasured.