A Bit About Cuneiform

Once cuneiform fell out of use around the beginning of the Christian Era, it was forgotten for nearly 1,500 years. Some late Medieval, European travellers reported seeing strange symbols carved into the fronts of buildings in today's Iraq, but there was no follow-up until the mid-19th century, when archaeologists began to uncover pieces of clay tablets with what was clearly cuneiform written on them. Research on cuneiform was hampered by the fragmented nature of the tablets, many of which were broken into several pieces, with different pieces of the same tablet frequently stored at universities on three different continents. Research on cuneiform was also retarded for more than a century by the much higher profile of Egyptology, which arose around the same time and drew many of the best and brighest away from Assyrology.

It also did not help that linguistics, until about the 1970s, focused on spoken living languages and regarded the study of writing systems, especially extinct ones, as being of peripheral interest. There also were, and still are, issues with sloppy and sometimes illegal excavations by an industry of local artifact prospectors, who sell their archaeological discoveries to artifact brokers, who in turn sell them to scholars-during which process most information about the provenance of cuneiform tablets is lost. Nevertheless, decipherment of cuneiform got on a solid footing within about two decades of its inception, when Assyrologists discovered a cuneiform version of the Biblical Flood myth that appears to have been written about 4,500 years ago, refers to the Biblical Noah as Utnapishtim, and makes him Sumerian and a polytheist. More than 300,000 fragments of cuneiform have been uncovered, and not only does the grinding work of reassembling and deciphering them continue to this day, but there are further, ongoing excavations in the area between the western border of Syria, the eastern mountains of Iran, central Turkey, and central Saudi Arabia.

Cuneiform is named after the Latin word cuneus, which means "wedge". It was written by using a special bone, wood, or metal instrument called a "calamus" to dig wedges and linear scrapes out of the surface that was being written on. That surface was usually a soft clay tablet, but sometimes it was the wax coating on a wooden board, and other tools were sometimes used to carve cuneiform into stone and metal. At the peak of cuneiform, it was used to write accounting records, legal documents such as contracts and decisions, urban plans, training manuals, job applications, religious documents, dedications on metal and stone, confidential letters couriered inside sealed clay envelopes, and many other types of written documents. Most people back then were dirt-poor, but many people of both sexes who had decent money knew how to read and write cuneiform (including attested female royal scribes). There were very few literary works, and even they had a utilitarian purpose, as nobody seems to have read cuneiform for pleasure. The surviving copies of the best-known piece of cuneiform, The Epic of Gilgamesh, were either student scribe exercises or attempts by a city-state king to assert political control of other city-states and ensure his name was not forgotten after his death.

Cuneiform was a three-dimensional writing system, as is clear from the photo below. 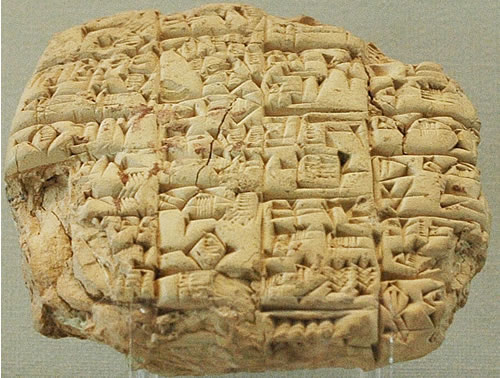 Letter sent by the high-priest Lu'enna to the king of Lagash (maybe Urukagina), informing him of his son's death in combat, c. 2400 BC, found in Telloh (ancient Girsu).

This makes any duplication of cuneiform signs on a flat medium, such as paper, an adaptation of cuneiform rather than actual cuneiform. On paper, cuneiform appears to consist of many triangles with straight or curved sides, which are of varying sizes, along with straight and curved lines, which are of varying lengths; but in real cuneiform those "triangles" were wedges dug out of the writing surface and the "lines" were scrapes dug into it. This makes a two-dimensional representation of cuneiform signs something different from the signs themselves. To see this, go to http://users.teilar.gr/~g1951d/, download and install the Akkadian font, open MS Word, select the Akkadian font from the dropdown Fonts menu, type in a number between 12000 and 12599, and hit alt-x. The displayed version of the cuneiform sign will clearly look different from real cuneiform. (For further information, download the Unidings folder from the same website, unzip it, open the included Excel document, then scroll down to cells 537-544 and click the "Cuneiform," "Cuneiform Numbers and Punctuation," or "Early Dynastic Cuneiform" hyperlinks to open the relevant .pdf document.)

Cuneiform went through a number of changes during the course of its active life.

The earliest "proto-Cuneiform" signs from about 5,300 years ago were pictographic (drawings of the object they represented) and logographic (single symbols representing entire words-different from today's Chinese writing system, which uses abstract signs rather than pictographic symbols). Over time, cuneiform signs became more abstract and were adapted to represent non-concrete concepts and ideas, as well as compounded to form longer and longer words, as is done in German. Some elements of later cuneiform, however, were syllabic (a sign represented a single spoken syllable rather than an entire word), as is the case with Japanese hiragana and katakana.

Being partly logographic, cuneiform was necessarily bulky. Around 5,000 years ago, there were at least 1,300 cuneiform signs, and by about 4,000 years ago, that list had been slimmed down to roughly 800. These signs could be read in either Sumerian or Akkadian, as the northern tribes who conquered Sumer did not have their own writing system prior to the conquest, so they borrowed cuneiform to write their own spoken language. Most residents of that region 4,200 years ago appear to have been bilingual in Sumerian and Akkadian. But cuneiform came under pressure from other writing systems, especially Aramaic, which was alphabetic (using a separate sign for each sound rather than each syllable or word), and therefore used much fewer and simpler signs suitable for writing on flat surfaces with ink. Spoken Sumerian died out between 4,000 and 3,700 years ago, while spoken Akkadian has been reduced to a few residual words in some Iranian and Iraqi dialects. Cuneiform continued to be used for official purposes mostly out of inertia, and the most recent discovered cuneiform document is an astrological chart written around 75 CE.

Further information on cuneiform is amply available both online and in print, but three online sources of information stand out. One is the fonts site mentioned above, as indicated above. Another is the Electronic Pennsylvania Sumerian Dictionary (ePSD), which offers a treasure trove of information to those who learn to navigate its complexities. The third is Prof. John A. Halloran's Sumerian language website, which presents views and information that might not be widely accepted but is concise in its disclosure of what appears to have been spoken Sumerian. Among print books, the most exciting is Writing Systems (Critical Concepts in Linguistics), edited by Christopher Moseley, which will be released by Routledge in December 2013 under ISBN 9780415520027, and will be about 1,600 pages long and cost between $1,000 and $1,500.

This work is released under the Creative Commons Attribution Sharealike License V 3.0, which license is incorporated into this document and forms an integral and inalienable part thereof. For details of permitted and prohibited uses of this work, please refer to the license text and wording.