The Jurchen script, which is also known as Jurchi, Jurchin or Southern Tungusic, was created by Wanyan Xiyin in 1120 and officially introduced in 1145. It was modelled on the Khitan script and contains a large number of characters from Chinese, many of which were modified.

The script is known from fragments of manuscripts and inscriptions on monuments of the Jurchen empire, from the Sino-Jurchen glossary and documents of the Ming Bureau of Translators and from Ming inscriptions dating from 1413.

The Jurchen people lived in the northeast of Manchuria before the 12th century. Then in 1115 they conquered a large part of northern China, including the lands of the Khitan people, and set up the Jin dynasty. The Jin dynasty fell to the Mongols in 1234. The Jurchen people became known as Manchus in the 17th century when they conquered the whole of China and established the Qing dynasty (1680-1911). 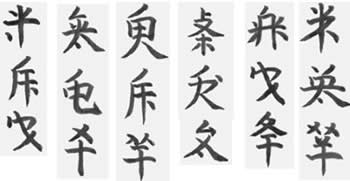