The Hieratic script was invented and developed more or less at the same time as the hieroglyphic script and was used in parallel with it for everyday purposes such as keeping records and accounts and writing letters. It was used until the 26th Dynasty, though by that time, it was only used for religious texts, while the Demotic script was used for most other purposes.

Hieratic glyphs and the hieroglyphs they evolved from

Hieratic determinatives and the hieroglyphs they evolved from

Sample of Egyptian written in the Hieratic script 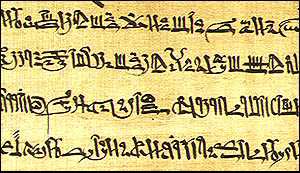