Iolo Morganwg, a.k.a. Edward Williams (1747-1826), an antiquarian, poet and collector of medieval Welsh literature, invented Coelbren y Beirdd or The Bardic Alphabet in about 1791 and claimed that it was the alphabet of the old Welsh bards.

In 1840 Taliesin ab Iolo, Iolo Morganwg's son, published a book entitled Coelbren y Beirdd and based on his father's writings which included details of the Bardic Alphabet. The alphabet proved popular with poets and druids during the 19th century, but some, such as Edward Davies (1756-1831), questioned it's authenticity. By 1893 few believed that it was genuine, and it was revealed that Morganwg had forged many of his manuscripts. 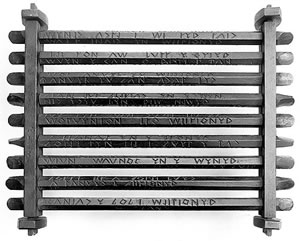