The oldest inscriptions that are recognised unequivocally as Chinese date from about 1200 BC and were found in Anyang, the capital of the Shang Dynasty (商朝 - 1600-1046 BC) in 1895. They consist of short texts inscribed on ox scapulae and turtle plastrons and are known as oracle bones (甲骨 - jiǎgǔ), and the script is known as the oracle script (甲骨文 - jiǎgǔwén) or "shell bone script".

The oracle bones were used for divination, a process which involved inscribing a question with a bronze pin, then heating the bones and inspecting the resulting cracks to divine answers to one's questions. Most of the questions involved hunting, warfare, the weather and the selection of auspicious days for ceremonies.

Some 400,000 fragments with inscriptions in the Oracle Bone Script have been found. Several thousand bones and plastrons have been reconstructed and many thousands of texts have been studied. The texts contain over 30,000 distinct characters, which are thought to be variant forms of around 4,000 individual characters, and scholars believe that they can understand between 1,500 and 2,000 of these characters. There may be 5,000 or so individual characters used on the Oracle Bones, not including variant forms, and possibly twice as many were used in everyday life.

Structural the Oracle Bone characters resemble modern Chinese characters in that some of them are combinations of two or more characters, and there is a high degree of abstraction in the characters. This suggests that the script was invented long before the Shang Dynasty.

Some examples of Oracle Bone characters with their modern equivalents and Mandarin pronunciation. 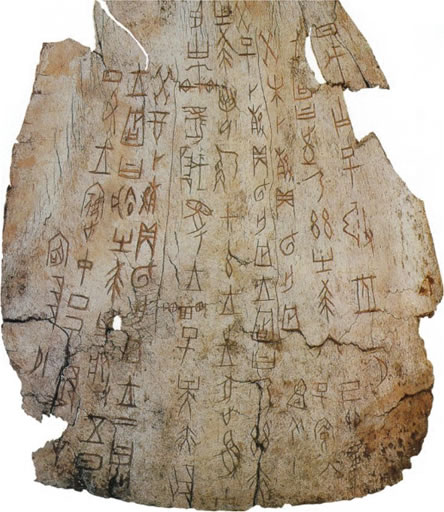