Chichewa is a Bantu language spoken in Malawi, Zambia, Mozambique, Zimbabwe, Eswatini and Bostwana. In Malawi Chichewa is spoken in the central and southwest of the country, and there were about 6.5 million speakers in 2009. The language is taught in primary schools, and used in newspapers and on the radio.

Chichewa at a glance

There are some differences between the Chichewa of Malawi and the Nyanja of Zimbabwe, however they are not considered separate languages. One variety known as Town Nyanja, which is spoken in Lusaka and other parts of Zambia, differs significantly from Nyanja and Chewa.

Chichewa was first written by António Gamitto in the 1830s, who explored the area now known as Malawi and Zambia and made ethnographic and linguistic notes, and lists of vocabulary. More extensive documentation of the language was made in the 1850s by Johannes Rebmann, a German missionary and explorer, who published a dictionary of Chichewa in 1877. A grammar of Chichewa was published by Alexander Riddel in 1880, and the first Chichewa version of the Bible came out in 1912.

Hear how to pronounce Chichewa: 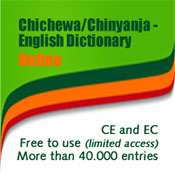