Raga is spoken in the north of Pentecost Island in Vanuatu by about 6,500 people. There are also Raga speakers on Maewo island and in Port Vila and Luganville. Raga is a member of the Vanuatu branch of the Southern Oceanic Malayo-Polynesian languages, and is also known as Hano, or is sometimes referred to by the names of the villages where it's spoken: Bwatvenua (Qatvenua), Lamalanga, Vunmarama and Loltong.

Raga has borrowed many words from Vanuatu's national language, Bislama, though the Turaga indigenous movement has been trying to find or coin native Raga words to replace those borrowed from Bislama.

In the late 19th century a number of missionaries, such as John Coleridge Patteson, Thomas Ulgau and Terry Crowley compiled grammatical descriptions and vocabulary lists of Raga, and also translated a few religious texts into the language. More recently a number of linguists have written papers on Raga, though there is no complete description of the language.

Members of the Turaga indigenous movement use a script known as Avoiuli, from the Raga words avoi (talk about) and uli (draw/paint), which was devised by Chief Viraleo Boborenvanua and based on traditional sand drawings. It is used as an alternative to the Latin alphabet for writing Raga, and can also be used for writing other Vanuatu languages, such as Apma and Bislama, and for English.

Avoiuli consists of letters, plus numerals and other symbols, and can be written from left to right or right to left. Words can be written with a single continuous stroke.

Avoiuli is taught at a school in Lavatmanggemu in north-eastern Pentecost, and is used for record keeping by the Tangbunia indigenous bank, which deals with traditional forms of wealth, such as mats, shells and boar tusks.

The photograph below shows a stone inscribed with the Avoiuli script. 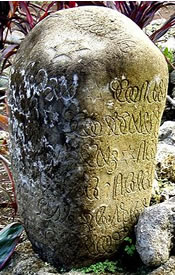