Dalecarlian runes were a runic alphabet used in the Swedish province of Dalarna/Dalecarlia until the 20th century, mainly to write the Elfdalian language. They developed from Younger Futhork during the 16th century and other time became increasingly mixed with letters from the Latin alphabet. This alphabet is also known as Elfdalian runes or dalrunes.

This alphabet was mainly inscribed into wood and stone on furniture, buildings, bowls, measuring sticks, etc. to write the names of the owners and/or makings. The earliest known inscription in Daelcarlian runes, for example, appears on a bowl from Åsen, a village in Älvdalen parish, and says "Anders has made (this) bowl anno 1596". 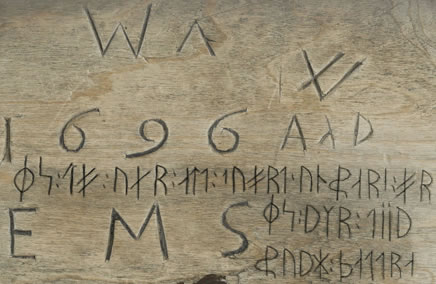